William Reynolds, hatter and dry goods salesman, leased the glebe land adjacent to Franklin Street and Church Circle from St. Anne’s Church in 1747. He constructed the tavern from which he conducted his hat business, rented rooms, and operated an “ordinary” (a.k.a. tavern) which served hot and cold food and liquor to visitors. The Beaver and Lac’d Hat, as the Tavern was known, provided a meeting place for farmers, gentlemen, merchants, and soldiers. Here one could eat, drink, leave messages, buy theater tickets, conduct business and trade, stable horses, and have a game of cards, chess, or backgammon. Among others, the Corporation of the City of Annapolis and the Mayors Court met regularly at the tavern. 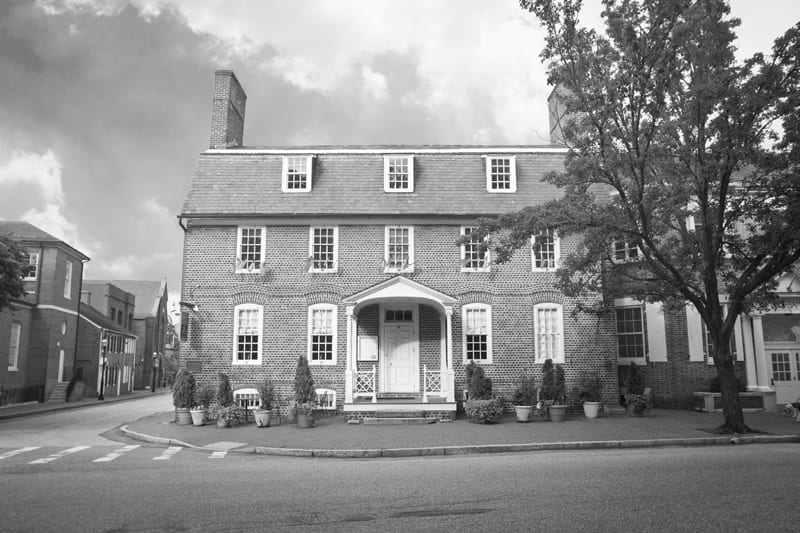 In 1935, Standard Oil Company wished to buy the property in order to tear down and replace the tavern with a filling station. However, a group of far-sighted Annapolitans proposed that Trust Fund residuals from the ‘Female Orphan Society’ be used to purchase and convert the structure into the Annapolis Public Library.

In l974, the library system had outgrown the building and its title was transferred to the National Trust for Historic Preservation, which in turn leased it to the Historic Annapolis Foundation.

In 1984, the tavern was leased to Historic Inns of Annapolis run by local entrepreneur, Paul Pearson. He had the vision to restore the tavern to its former use and importance to the city. Unfortunately, the cost of restoration put enormous burdens on the operation of the tavern and, once again (in 1992), Farmers National Bank took control of the tavern. In 2000, Jill and Andrew Petit purchased the building and it now operates as a tavern much like it did some 270 years ago. Reynolds Tavern again welcomes guests for meals, refreshments, and lodging and maintains the intimacy and comfort that were its hallmark in the 18th century. 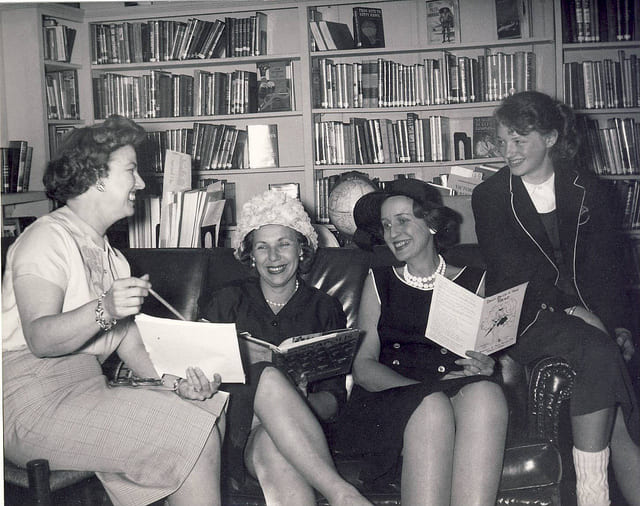 Reynolds Tavern consists of four levels; the Pub in the Cellar (1747 Pub) displays the stone foundations of the building, a walk in fireplace, and the existence of the Rumford Broiler, all dating back to the 18th Century. The first floor tea rooms are very much as they were originally built. The second floor has hotel rooms: two prestigious suites and one single bedroom.
Learn More

An Outside Look at Reynolds Taverns

Reynolds Tavern is a well-proportioned, two-and-a-half story, five-bay wide, gambrel-roofed brick structure with a center entrance. The original cellar window openings were shortened almost a foot when Church Circle was graded and paved with brick in 1832.

The brick front façade is laid in all-header bond above the projecting watertable, which is laid in English bond because of the added strength of interlocking headers and stretchers. A highly distinctive, four-course-deep belt divides the front façade at the second-floor line. The belt follows the curve of the arched windows below.

The central entrance has a modern door. The original door hung in place until 1964 when the library replaced it – likely to comply with local building requirements that doors open outward. The transom, however, dates from 1812. The pedimented entrance porch is an early and valuable addition to the front façade. It was the work of John Shaw, an important cabinet maker of Annapolis who was engaged by Farmers Bank in 1812 to make improvements to the property. The design of the porch is similar to the porch Shaw designed and built at his own residence on State Circle.

Paint evidence shows that whitewash was applied to the brick between 1747 and 1812. By 1890, the whitewash was wearing off and, by the turn of the century, the brickwork was stripped clean.

An Inside Look At Reynolds Tavern

The interior of Reynolds Tavern is rich in history, and well-documented thanks to William Reynolds’s Inventory of 1777, records kept by Farmers Bank, and the Library Association.

The center hall is largely unchanged from its original 1747 design. The wainscot along the long wall (early 19th century) is an exact reproduction of the original paneling. The staircase is essentially of the 1747 period. An overhead beam was notched to provide headroom around 1906.

The south dining room (on the left as one enters the hall) was called The Hall and The Little Back Room in Reynolds’s Inventory. Originally two rooms, each had a fireplace. The single room and fireplace date from 1812 when Annapolis cabinet maker John Shaw altered the building for Farmers Bank.

The north dining room was also originally two rooms. The well-designed and constructed mid-18th century cupboard was likely moved to the room in the 19th century, possibly as early as 1812, when John Shaw made major changes to the “banking room” and the tavern was given over to the exclusive residential use of the bank’s cashier. 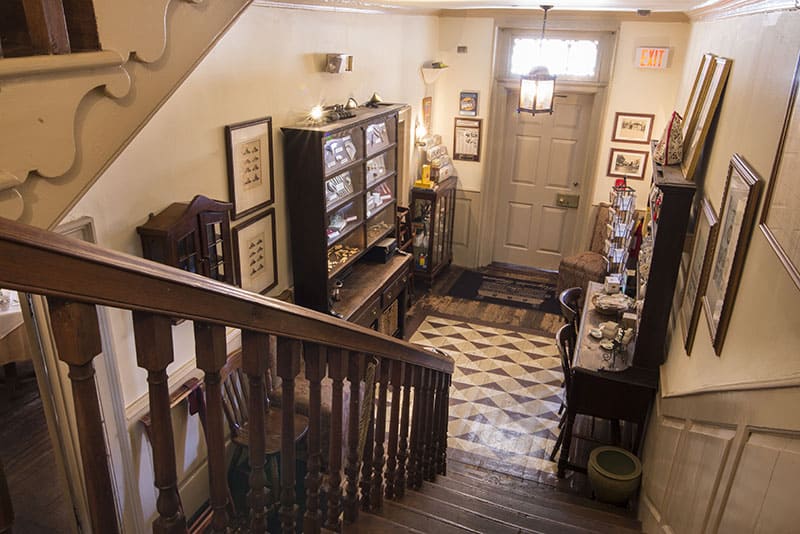 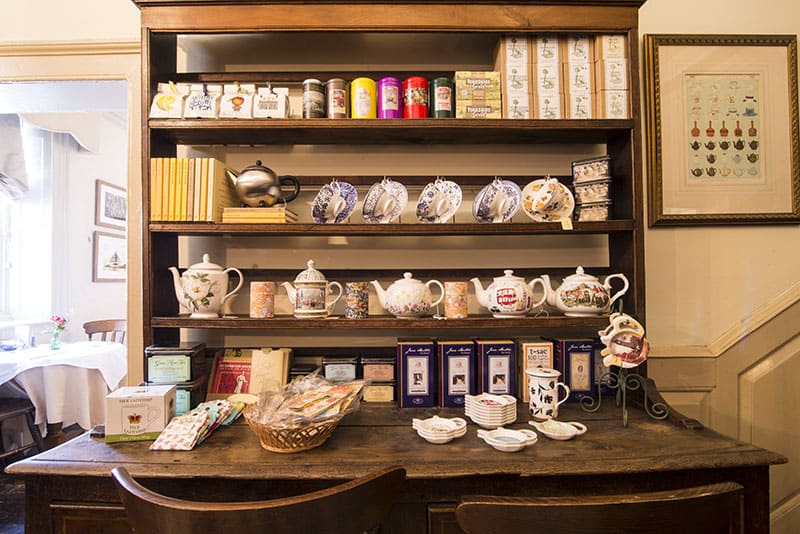 On the second floor, doors have been added to access the back rooms of the original building which adds two additional rooms to rent. The rooms were originally separated by the 1747 board partition, but it has since been moved to make the back room slightly larger. The doors may have been added in 1785 when Alexander Truman, Reynolds’s son-in-law, advertised the tavern as a boarding house.

The floor, with some patches, is the original 1747 wood. The walls and ceiling also date from 1747; architectural historians have traced 29 coats of whitewash on them.   In the north chambers, the front room has a 1747-period fireplace flanked by built-in closets. They are not original but are of an early date. Paint history on these walls reveal 12 coats of whitewash with no other finish until the early 20th century when the walls were covered with canvas.

In the south chambers, the original plaster walls were whitewashed. All wood trim was painted a grayish-green into the 1770s. Reynolds referred to the front room as the “Great Green Room” in his inventory.

The staircase to the third floor was relocated around 1785. The blocked-in dormer previously led to attic space over the rear addition. In the relocation, most of the original parts were reused and the skirting, handrails, balusters, newels, bottom rails, and the balustrade are all from 1747.

Reynolds called the big room spanning the entire south side of the tavern the “Upper Large Room with Five Beds.” This was always one room. The door and trim, the casings and cheeks of the dormers, the base molding, and the floor all date from 1747. The pointed, arched Gothic Revival mantel is from the mid-19th century.